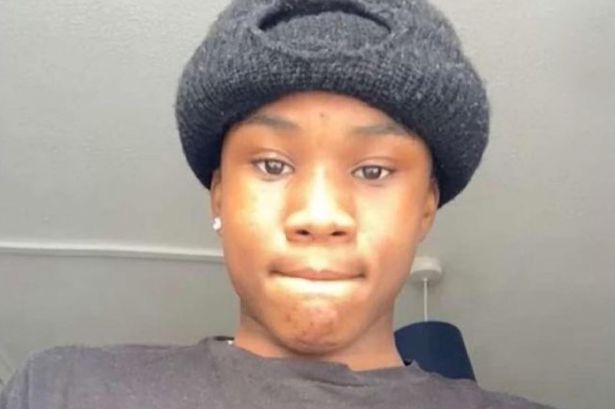 Six people - including two young teenagers - have been arrested on suspicion of murder after a 14-year-old boy was stabbed to death in the street during a 'gang fight'.

Police say two boys, aged 13 and 14, are among those arrested following the death of the teenager in the Kingstanding area, near Birmingham.

The 13-year-old was detained in the Walsall area today, say police, while the 14-year-old was arrested along with a 38-year-old man in a vehicle in Cheshire.

A 33-year-old man was also arrested in the Kingstanding area earlier today, according to West Midlands Police.

It comes as witnesses claimed a 'gang of white lads' killed the 14-year-old boy like a 'pack of feral animals'.

Witnesses say the boy who died was black. But police today ruled out a racially motivated attack but continue to hunt up to seven suspects.

Emergency services rushed to the scene near to the McDonald's on College Road, Kingstanding, Birmingham, at around 7.30pm on Monday in the aftermath of a large street fight.

It is thought that the schoolboy, who has not been identified, had previously been targeted by a gang at his school with his family due to meet police before he was fatally attacked.

He is believed to have been playing football with friends when he was jumped by yobs as he made his way home.

The teenager was pronounced dead in the street from knife wounds despite the efforts of paramedics.

One mother, who did not wish to be named, said: 'It was carnage when I looked out my window, there were kids everywhere.

'They were like a pack of feral animals the way they were swarming around him.

'Apparently a gang of white lads just jumped him, I don't know how many had knives but it is just terrifying. He was only a child.'

Detective Chief Inspector Stu Mobberley, who is leading the investigation, said the force were aware there had been 'speculation in the community' but ruled out that this was a racially motivated attack.

Community activist Desmond Jaddoo said: 'I was here last night with the boy's mother and friends who had gathered and they were naturally inconsolable.

'She has lost her 14-year-old boy who had his whole life ahead of him and will never return home.

'There are questions being asked of the police and an incident which happened last week at school.

'I can't say any more than that but there are major concerns about how that was handled.

'If this does reveal itself to be a racially motivated crime, West Midlands Police need to treat it with the utmost seriousness.

'Tensions are already high in the community.' 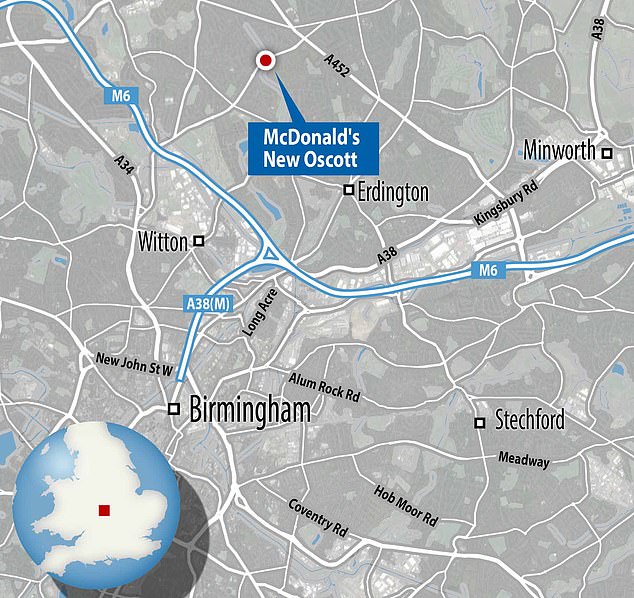 Other residents living near the scene reacted with horror to the brutal stabbing on their doorstep.

One, who wished to remain anonymous, said: 'I didn't see what happened but I'm told a car pulled up at some point and loads of blokes jumped out.

'There was absolutely loads of people around in the aftermath. I just saw people running in all different directions.

'If it's racially motivated, it's like the Stephen Lawrence thing. It wouldn't surprise me around here.

'I've been in tears for his family, he was just 14-years-old, his life had not even begun.'

The death of the schoolboy has prompted an angry response in the city with many calling for stricter knife crime laws following the tragedy.

One social media user wrote: 'That poor boy! He is just a child... I hate the thought of his final moments. Thoughts with the family! Such a tragedy.'

Another added: 'RIP yet again another young person has been taken from his family. What is this country coming to? No one deserves this, I hope the people who have done this get caught and have the book thrown at them. Name and shame them.'

'Absolutely terrible news 14 is no age. I have a child almost this age, breaks your heart our kids are growing up in such a messed up world. RIP little man thoughts are with his family and friends at such a sad time', a third commented.

Another said: 'Evil scumbags. RIP to the poor soul and heartfelt condolences to the family who now have to deal with this utter heartbreak.' 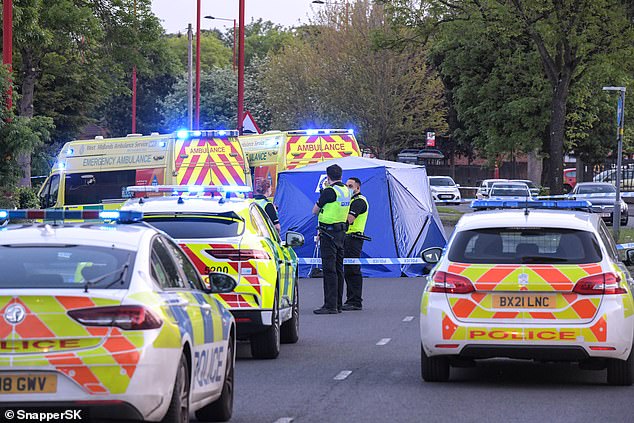 Emergency services rushed to the scene near to a McDonald's on College Road, Kingstanding, Birmingham, at around 7.30pm on Monday evening. Pictured: Police at the scene

Police have since said that a group of up to seven people ran off in the direction of Chester Road.

The force said they had immediately launched a murder investigation and flooded the area with officers in a search for those responsible.

Officers are also speaking to witnesses and fast-tracking CCTV enquiries.

Detective Chief Inspector Stu Mobberley, who is leading the investigation, has since said: 'We've made rapid progress in the investigation already and are following up a number of really strong lines of enquiry.

'We know there tensions and emotions are high, and we're aware that there is some speculation in the community that this was a racially motivated attack.

'At the moment, there is nothing to suggest that this is a racially motivated attack.

'What we do know is that this was appalling violence which has cost a young lad his life.

'We still have witnesses to speak to, and I'd urge anyone with information to get in touch with us as quickly as possible so that we can arrest those involved in this appalling attack.'

The force said a post-mortem will be held this afternoon.

Officers have also been supporting the boy's family, after what police earlier called a 'shocking and senseless tragedy'.

Detectives vowed to leave no stone unturned in their hunt for the 'callous individuals responsible - or for anyone harbouring them, knowing what they've done'.

Labour MP Jack Dromey, whose Erdington constituency includes the area where the stabbing happened, said: 'Truly shocking that a 14-year-old teenage boy in Kingstanding was stabbed to death this evening.

'Anyone with any information should contact West Midlands Police. My condolences to his family.'