Our society cannot sustain itself when so few have so much, while so many have so little 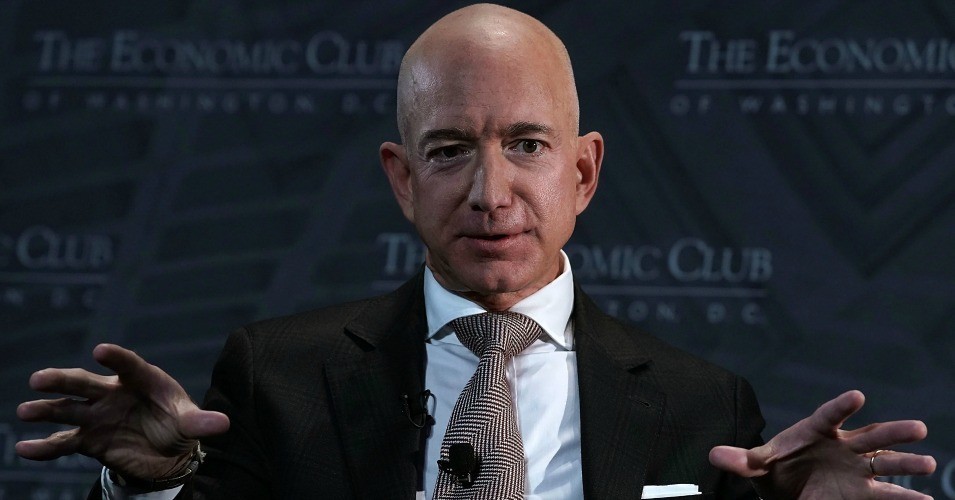 Amplifying fresh critiques of wealthy inequality that have mounted throughout the coronavirus pandemic, Amazon founder Jeff Bezos—the world's richest man—has added nearly $24 billion to his already massive fortune in 2020 as virus-related lockdowns across the globe have forced people to stay inside and fueled increased e-commerce demand.

Explaining the source of a nearly 5% jump in Bezos' net worth Tuesday, Forbes reported that Amazon stock surged 5.3%, "hitting a new record close of $2,283 per share. The stock is now up over 20% so far this year, outpacing the benchmark index (the S&P 500 is down over 12%)."

Turns out Jeff Bezos has got the biggest coronavirus stimulus of all ... https://t.co/10BrXbnIZ6

Bezos was worth $138 billion as of Tuesday, according to the Bloomberg Billionaires Index. He is Amazon's CEO and president, and owns an 11.2% stake in the e-commerce giant, which has come under fire for how it has treated workers during the outbreak.

While Bezos tops the index, Fortune noted that the 18th spot now belongs to his ex-wife MacKenzie, "who was left with a 4% stake in Amazon as part of the couple's recent divorce settlement. Her net worth has climbed $8.2 billion to $45.3 billion."

The index updates followed a Forbes report from Saturday about how "market gains led to a combined $51.3 billion boost for 10 of the world's billionaires since the market closed a week ago, on April 2." Bezos gained $6.8 billion in that time, an increase second to only that of Amancio Ortega of the Spanish fast-fashion retailer Inditex.

Sen. Bernie Sanders (I-Vt.), a longtime labor rights advocate and foe of millionaires and billionaires, tweeted the Forbes report Wednesday and highlighted how the wealth increases of Bezos and other billionaires contrast with the millions of Americans who have lost their jobs because of the ongoing public health crisis.

$33.4 billion. That's how much the wealth of Jeff Bezos and six other billionaires increased last week while millions of Americans were filing for unemployment.

Our society cannot sustain itself when so few have so much, while so many have so little. https://t.co/XwlhIXTMzS

As Common Dreams reported last week, U.S. unemployment claims during the pandemic have soared to 16.8 million, which one economist noted "is a mind-boggling 2,500% increase over the pre-virus period."

That contrast between U.S. billionaires and the nation's newly unemployed was also pointed out on Twitter Wednesday by Public Citizen, which cited the Forbes report.

While millions of people across the United States have lost their incomes due to COVID-19, Amazon has filled 100,000 new jobs since March and plans to add 75,000 more "to help meet customer demand and assist existing employees fulfilling orders for essential products," according to a blog post on the company's website. The retailer has "increased pay for hourly employees by $2/hour in the U.S., C$2/hour in Canada, and €2/hour in many E.U. countries."

Amazon has "made over 150 process updates to help protect employees—from enhanced cleaning and social distancing measures to piloting new efforts like using disinfectant fog in our New York fulfillment center," the blog post said. The company is also building a lab to test its front-line workers for COVID-19 and has "distributed personal protective gear, such as masks for our employees, and implemented temperature checks across our operations worldwide."

However, workers at Amazon warehouses and Whole Foods Market—the grocery chain acquired by Amazon in 2017—have expressed fear and frustration about working conditions, and accused the company of not doing enough to protect employees. Just this week, Amazon also elicited condemnation for firing three workers who publicly criticized the company's pandemic response and treatment of employees.

"Instead of firing employees who want justice," Sanders tweeted Tuesday, "maybe Jeff Bezos—the richest man in the world—can focus on providing his workers with paid sick leave, a safe workplace, and a livable planet."

The safety of Amazon facilities in the midst of a pandemic has raised particular alarm. According to Business Insider:

More than 74 U.S. warehouses alone have now reported cases of the virus, and concerns from workers about safety and sanitation have ballooned, leading to employee walkouts and protests.

On Tuesday, Business Insider broke the news that Amazon had seen its first warehouse worker death, an operations manager who worked at the company's Hawthorne, California warehouse. The man died on March 31.

Some Amazon employees told Business Insider that they feel they have to choose between paying their bills and risking the health of themselves and vulnerable family members.

"I was grateful at first for the unlimited [unpaid time off] and $2 increase, but as things got worse and the virus was spreading more and more, it didn't matter. I don't want to be there, but I need the income," said one worker who cares for an elderly relative. "The stress of bringing it home to him makes me physically ill."