Denzel Washington Reveals the Aftermath of Will Smith’s Slap at the Oscars to T.D. Jakes

Since 2011, the International Leadership Summit (ILS), formerly the International Pastors and Leadership Conference, has cultivated aspiring and tenured entrepreneurs, leaders, and influential change agents with invaluable leadership insights from T.D. Jakes, ILS visionary and founder.
Inspired by Jakes' New York Times bestselling book, "SOAR! Build Your Vision from the Ground Up," ILS continues to be one of the most transformative leadership conferences celebrated by the world's brightest minds. With keen attention to detail in developing the CEO, faith leader, or aspiring entrepreneur, ILS assists leaders in constructing a solid foundation of leadership that will stand the test of time.

Meet us in person at the Orange County Convention Center in Orlando, FL, from May 4-6 as Jakes leads our 2023 ILS alongside a lineup of groundbreaking thought leaders: https://thisisils.org

T.D. Jakes is a real estate mogul, New York Times bestselling author, pioneering CEO and entrepreneur, global humanitarian, and a devoted philanthropist who serves communities worldwide. As the founder of T.D. Jakes Real Estate Ventures, LLC, he continues to impact the global marketplace positively and stimulate wealth development. His multimedia entertainment empire spans film, television, radio, music, books, and an award-winning music label. His films include "Miracles From Heaven" and the made-for-TV movie "Faith Under Fire," and his latest book, "Don't Drop the Mic: The Power of Your Words Can Change the World," unlocked the code for how to make your voice matter.

Named "America's Best Preacher" by Time Magazine, Jakes is CEO and founder of T.D. Jakes Ministries and senior pastor of The Potter's House, which has a passionate international audience. He reaches tens of thousands through conferences such as Woman, Thou Art Loosed! and the International Leadership Summit, a standard-bearer for ecclesial learning and professional development.

Denzel Washington is a groundbreaking actor, director, and producer. His unforgettable performances have garnered him two Academy Awards, three Golden Globes, a Tony Award, and countless others. He received his first Oscar for the historical war drama "Glory" and his second for the crime thriller "Training Day." This year, he's nominated yet again for "The Tragedy of Macbeth." He won a Tony for his performance in August Wilson's "Fences."

After starting his career in New York theater, he rose to fame when he landed a star-making role on the T.V. series "St. Elsewhere." Recently, he produced "Ma Rainey's Black Bottom" for Netflix and directed "A Journal for Jordan." As the recipient of both the AFI Life Achievement Award and the Golden Globes' Cecil B. DeMille Award, he cemented his legacy in Hollywood and beyond.

Subscribe to the official T.D. Jakes Ministries channel to stream our latest messages, your favorite sermons from over the years, and much more. Hit the

Denzel Washington Reveals the Aftermath of Will Smith’s Slap at the Oscars to T.D. Jakes 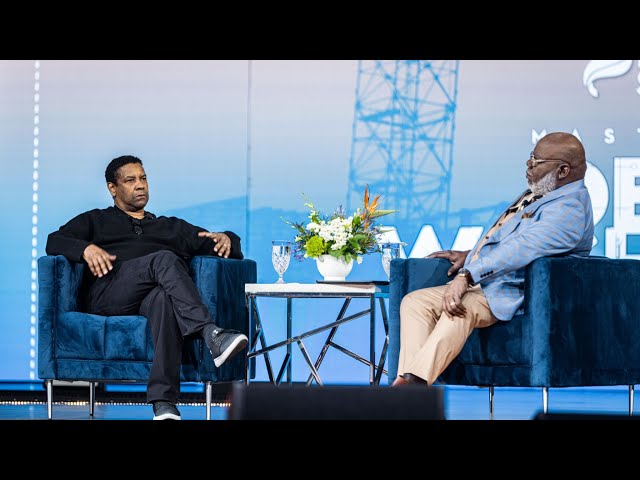 During the 2022 International Leadership Summit, T.D. Jakes hosted a Master Class session with Denzel Washington. During their Master Class, they brie...