Most of the cars bought and used by Africans are imported and most are second hand, carrying huge import duties that typically double the price, making them more expensive than new cars sold abroad.
The African automobile industry is intensifying its craft in vehicle manufacturing with made in Africa cars, giving the Germans, Japanese, Britain, American and Chinese leaders in vehicle manufacturing some competition in the local markets across Africa.
Africa has literally being a dumping ground for foreign used automobiles. According to innoson vehicle manufacturing; We are not second class people that should only drive second hand vehicles", which is absolutely correct.

Innoson Vehicle Manufacturing
Nigerian born entrepreneur, Innocent Chukwuma is the founder and developer of The Innoson Vehicle Manufacturing Company, Nigeria. They are the first technology company to manufacture cars in Nigeria.
At the moment, Innoson Motors is one of the biggest car manufacturers on the continent, having sold 10,000 vehicles since inception from its plant in Nnewi, to customers including the Nigerian government. So far, it has produced luxury cars, minibuses and trucks. Innoson cars are already on sale and in use in Nigeria. Innoson has released at least 500 Nigeria-made cars at the cost of between N1.5- N4million. It produces a very wide variety of cars and because of this, it is able to attract the patronage of the Nigerian government.
The model that caught the most of attention in recent times is the 'IVM G80' which is a look alike of the famous 'Mercedes Benz G Wagon'.

Kantanka Motors
The Kantaka cars is an automobile company that was established in Ghana in 1994, by Dr Ing. Kwadwo Safo Kantanka.
The Kantaka produces both saloon and four-wheel drives. The company also has SUVs which include the Nkunimdie and the Kantanka Opasuo. There is also the Kantanta Onantefuo 4×4 pickup. At the moment, some Africans are already owners of this proudly made in Ghana car. They are on sale in variety of colours and models. We have the Kantanka SUV, the Kantanka pickup, etc.

Laraki Manufacturing
Laraki is an automobile company founded in Morocco by Mohamed Laraki, a businessman and car designer in 1999.
The Casablanca based car company started operations by manufacturing Yachtes and later moved to the manufacturing of luxurious supercars. The first car it produced is the Laraki Fulgura, and that was in 2002.
The car was powered by a Mercedes-Benz engine and makes use of the 1991 Lamborghini Diablo Chasis. Borac was its next car, followed by Epitome, and from then on, the company has kept growing and evolving. Its 2013 Laraki Epitome Concept is sold for $2,000,000. It has a V8 engine, 1100 Horsepower (RPM), and a top speed that is estimated at 175 mph.

Mobius Motors
Founded in Kenyan in 2011 by Joel Jackson, the first generation Mobius II was launched in 2015 with the next-generation released in 2019. Mobius uses the slogan “Designed for Africa. Built in Africa. Mobius Motors released the first batch of their low-cost vehicles towards the end of 2017. The multi-purpose vehicle which costs about $10,000 was manufactured for Africa’s mass market.
Mobius motors are designed around Africa’s common road terrain and transport usage. The Kenyan company that took up the audacious task of producing low-cost vehicles for Africa’s off-road and rough terrain, increased production of a newer, more advanced model in 2018 after an optimistic reception of its pioneer model.

Wallyscar
The small but powerful Wallyscar is manufactured in La Marsa, Tunisia. Founded in 2006, the company is known for building of affordable, reliable and powerful 4X4s, despite the size of its vehicles, which are similar to Suzuki and Skoda.
Two brothers Omar and Zeid Guiga set up the company with the idea of making the vehicles sporty, colourful, off-road, and more environmentally friendly, as well as trying its hands on international off-road motorsport. 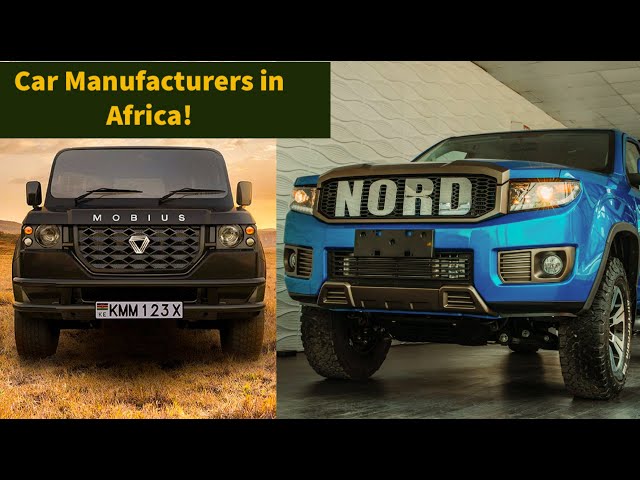