Located in Tulsa, Oklahoma, this residential neighborhood known as Greenwood provided an opportunity for Blacks to accumulate wealth and make advancements during a time of racial terror, in this History special, "Tulsa Burning: The 1921 Race Massacre."

Find out more about this and other specials on our site:
https://histv.co/History

Executive produced by NBA superstar and philanthropist Russell Westbrook, and directed by Peabody and Emmy-Award® winning director Stanley Nelson (“Freedom Riders”) and Peabody and duPont-Award winner Marco Williams (“Two Towns of Jasper”), the documentary commemorates the 100th anniversary of the horrific Tulsa Race Massacre of 1921, one of the worst acts of racial violence in American history, and calls attention to the previously ignored but necessary repair of a town once devastated.

In the 1920s, the Greenwood District of Tulsa, Oklahoma, also known as Black Wall Street, was one of the most prosperous African American communities in the United States. Filled with booming businesses and thriving entrepreneurs, the district served as a mecca of Black ingenuity and promise, until the evening of May 31, 1921, which marked the start of the devastating Tulsa Race Massacre. More than thirty-five city blocks were burned to the ground and hundreds of Black city dwellers were killed. The Tulsa Race Massacre of 1921 is one of the most tragic moments in our nation’s history, yet this harrowing event is largely unknown to many Americans. It is an often-overlooked story that needs to be told.

“Tulsa Burning: The 1921 Race Massacre” takes an in-depth, sobering look at the tragic events of a century ago and focuses on a specific period, from the birth of Black Wall Street, to its catastrophic downfall over the course of two bloody days, and finally the fallout and reconstruction. The documentary also follows the city’s current-day grave excavation efforts at Oaklawn Cemetery where numerous unmarked coffins of victims who were killed and buried during the massacre have been recovered. It will also feature rare archival footage and imagery from the time, coupled with commentary and interviews from numerous historians, city leaders, and activists, including the Tulsa Historical Society & Museum, the John Hope Franklin Center for Reconciliation, the Tulsa Race Massacre Centennial Commission and the Historic Vernon A.M.E. Church, among others.

HISTORY® is the leading destination for award-winning original series and specials that connect viewers with history in an informative, immersive, and entertaining manner across all platforms. The network’s all-original programming slate features a roster of hit series, premium documentaries, and scripted event programming. 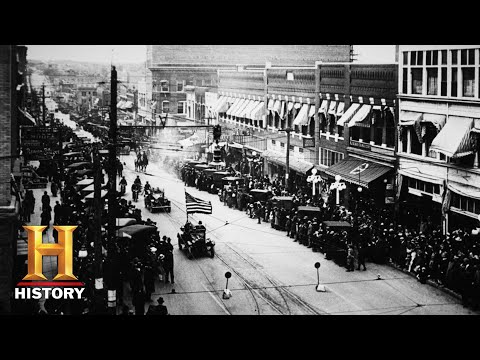 Located in Tulsa, Oklahoma, this residential neighborhood known as Greenwood provided an opportunity for Blacks to accumulate wealth and make advancem...