Mix up Jake Paul, Dana White and poor UFC fighter’s pay and you got yourself an explosive conflict on your hands. In this video, I’m going in depth into the reasons why everybody’s fighting and how the consequences might have a huge impact not only on the sport but on the rest of the world.
_
Chapters

1. The EA Sports UFC Game: The UFC sold the rights of the fighters to EA Sports WITHOUT compensating the fighters. The fighters don’t get paid for the use of their image for PERPETUITY.

2. Good Guy Joe: Joe Rogan paid for the surgery of kickboxer Miriam Nakamoto. Just like many other fighters, she couldn’t afford it on her own. Joe footed the entire bill. How many other fighters didn't get that chance?
__
Synopsis

The name of the Paul brothers has circulated online a lot in the past few months. That’s because the youngest brother, Jake, has been taking on the biggest combat sports league out there on one issue: fighters pay. And he’s been knocking people out in the process.

Dana was always known as a ‘streets smart’ type of guy. He got kicked out of highschool for his rebellious behaviour and dropped out of college twice. He finally got into the boxing scene at 17 until one event in South Boston changed the course of his life forever.

Dana moves to Vegas and meets Mixed Martial Arts fighters for the first time in his life. He’s blown away by their potential. Back then the UFC already existed but it was nothing like what it is today, picture some kind of freak show circus cage fights with no rules and no regulations.

Amongst those fighters are two future UFC legends, Chuck Liddell and Tito Ortiz. Dana becomes their agent. One day as he’s negotiating with the owner of the league, Art Davie, he learns that the UFC is in financial trouble. He and Lorenzo Fertitta buy it.

The one and only reason the UFC is as we know it today is because of the work Dana and Lorenzo did. Before we all judge him harshly for what I’m about to tell you, let’s just remember that he’s the man who built it all. The UFC’s his baby.

Jake and his older brother Logan are Youtube superstars. They were deep into sports at a young age and excelled in all kinds of physical competitions. They’re what you’d refer to as natural athletes. They took that family rivalry to a whole other level when the social media platform ‘Vine’ came to prominence in 2012. The two brothers decided to compete on who would get the most followers. In the next few years, they would both gain millions of followers across Instagram, Facebook and Youtube.

If there’s one thing you should keep in mind about Jake, it’s that he’s a mastermind at getting clout. He knows what he’s doing on social media, knows how to get media coverage, grow an audience and leverage it to its full potential.

From 2010 to 2019, just as Jake Paul is growing his following, Dana White grows the UFC to records high. But there’s one key character that doesn’t benefit from that growth, and it’s our last player, who’s at the very heart of this conflict: The fighter.

Lux - Ryan Taubert
Fortress - Roary
Hello Goodbye - Joznez
Penumbra - Hannah Parrott
Put The Work In - LG
Who Gon' Stop Me Now - King Flexx
Main Event - Tyrone Briggs
Enigma - Duomo
Luna - Tony Anderson
A Moment - Chris Coleman
Ono Sendai - Makeup and Vanity
Born For This - CRMNL
Son of a Gun - The Yeahtones
Legends - Summer Kennedy
_
Fair Use Notice
This video and the content it features are for educational and informational purposes only. The content may contain copyrighted material owned by a third party, the use of which has not always been specifically authorized by the copyright owner. Notwithstanding a copyright owner’s rights under the Copyright Act, Section 107 of the Copyright Act allows limited use of copywriter material without required permission from the rights holders, for purposes such as education, criticism, comment, news reporting, teaching, scholarship, and research. These so-called fair uses are permitted even if the use of the work would otherwise be infringing. If you believe that any content on this video violates your intellectual property or other rights, please contact me via my email in the "about" page on my channel. 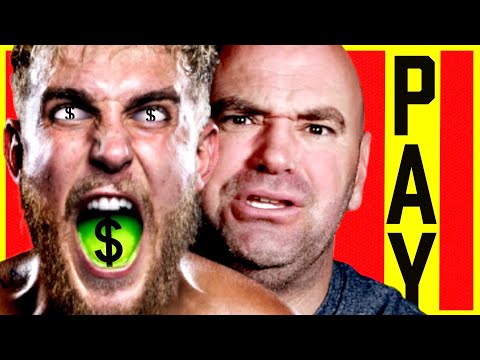 Mix up Jake Paul, Dana White and poor UFC fighter’s pay and you got yourself an explosive conflict on your hands. In this video, I’m going...